SOME REFLECTIONS ON MY — Body Mind and Spirit: Exploring the Parapsychology of Spirituality. Charlottesville, Virginia: Hampton Roads, 1997. (Editor and Contributor). 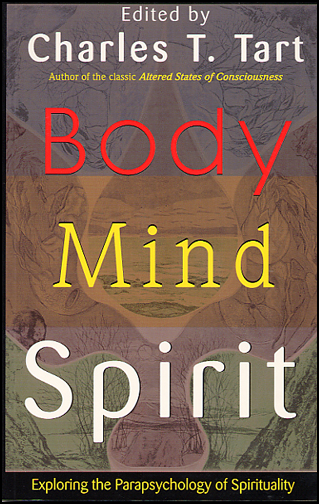 As a transpersonal psychologist, it’s clear to me that one of the great dilemmas of modern life is what do you do about spirituality?

At one extreme, you can dismiss all religion and spirituality as superstitious nonsense.  Even worse, it’s superstitious nonsense that was often used to keep the masses in line and support existing power structures.  Not that there’s anything novel about that, of course, people in power use anything they can to hold onto their power.  At the other extreme, religion can be a wonderful social glue that brings out the best in people and binds them together (when it’s not being used negatively to denounce and wage war on those who don’t believe just like you), and spirituality can be about working to have some of the most important experiences that can happen to people.

I distinguish spirituality and religion here, and in most of my writings.  By spirituality, I generally mean transpersonal, mystical experiences, experiences difficult to describe or to understanding one’s normal state, but which feel like they have been revelations or at least glimpses of a far deeper truth about the most important things in the world.  I think our great religions came from the spiritual experiences of their founders.  Being human, though, we’re social animals, we work over what the founders of said and turn it into socially acceptable structures and ideas.  In many cases it becomes a matter of believe A, B, and C or else you’ll be punished in the here and now or internally in some kind of Hell, don’t think too much for yourself.  In other cases religion can encourage people to practice spiritual exercises, such as meditation and prayer, in the hope that they will eventually lead to the same kind of deep experiences that the founders had, so you have your own personal, direct experience of something much higher than ordinary existence.

There is no doubt that for some people, transpersonal, mystical experiences have been the most important experiences in their lives, but then you deal with the question of are they true, or are they some kind of strange malfunctioning of our brains that make up an imaginary reality, while connecting with powerful emotions so it seems like absolute truth, but it’s really all fantasy.  After all, we all have dreams at night where our brains (or minds?) create a whole world that our experiencing self accepts as real.  When people talk about spiritual beings, survival after death, the effectiveness of prayer, psychic healing, and the like, are we talking about only imagination, for better or worse, or about realities?

Being human, there is no doubt that imagination can play a very big part in trying to explain these experiences to others, or perhaps even in their unfolding, but is there a reality basis to the spiritual/transpersonal beyond that?  Here’s where experimental work in parapsychology shows that yes indeed, you can limit the mind to the human brain, and sometimes people have experiences that say that our minds can sometimes transcend anything we can imagine the material brain is capable of creating.  This anthology has essays by prominent parapsychologists as to what our minds can sometimes do and the implications of these for believing that at least part of what we consider the spiritual is based on realities, not fantasies.  As a simple example, from a point of view of total materialism (a philosophy too often mistakenly equated with scientific “truth”), silent prayer is nothing more than talking to yourself, there is no useful electromagnetic radiation from your brain that could carry your hopes and pleas to another brain.  But there are dozens and dozens of rigorous experiments, accumulated over decades, that show that sometimes telepathy, correctly responding to another’s thoughts with no material means to carry that information, happens…

Note: I have included links, usually to Amazon for convenience, as it leads to more formal information and reviews by readers. Most of my books are in print in some form, some may have to be found used.